Few days ago at Gamescom 2016 EmuGlx’s Milan Radosavljević aka Wahad had a oportunity to talk about World of Final Fantasy with the Hiroki Chiba from Square Enix, alongside colleague from Official PlayStation Magazine UK.

Square Enix (Hiroki Chiba): When we’re asking questions, we can alternate, one person asks the questions and we move on to the next. And, before we start, have you had the chance to play the build of this game? We do have a build set up so if you’re curious to know what the game looks like, we can show it on the screen behind me.

EmuGlx: Well they didn’t inform me this was an interview, but I have questions of my own!
PSM UK: So with the launch of PSVR coming up, one of the questions we’re asking the devs is – if you could make one VR game project, what game would you make?

Square Enix:  If I had the freedom to make any VR game, I would actually love to adapt The World of Final Fantasy. Especially the stacking element, I think, would be nice to see in VR.

EmuGlx: How did you decide to make a game with this artistic approach? The World of Final Fantasy is cute and beautiful, but it doesn’t seem too serious like the rest of the Final Fantasy franchise.

Square Enix:  It all began, when our producer, Mr. Shinji Hashimoto, had mentioned the Final Fantasy franchise reaching its 30th anniversary. If you look at our player base, they have come to grow up with the game. Some people have become adults, so Final Fantasy seems to have followed their growth and became more mature and more geared towards adults. So Mr. Hashimoto had suggested coming back to that initial feeling when the children were interested in playing the game, and try making a game that’s interesting to the younger generations. So from that idea, we were considering a cute art style, and we talked to the designer, Mr. Izumisawa, about coming up with the character designs. From there, he talked to Mr. Nomura, as well as Mr. Hashimoto, to flesh out the ideas, utilizing these cute characters.

If you look at the newer games, like Final Fantasy XIV, or XV, you can see how realistic and gorgeous their graphics is. We are pursuing the latest technology, and trying to render in the most advanced way possible, but it was important for us to consider exploring different options as well, and trying to see if there’s a way to approach Final Fantasy in a different way, so Mr. Nomura also drew these characters, in collaboration with Mr. Izumisawa’s art, and that’s how we developed the idea of The World of Final Fantasy.

Square Enix:  In terms of the target demographic, of course the concept is to have as broad range of players as possible. However, specifically speaking, since my favorite games were III and IV, and since I was in my childhood while playing these games, I would love to have children of the same age I was back then, to play The World of Final Fantasy and have a similar experience. And in terms of a specific era, which I felt was my favorite were of course the titles I have worked on in the past, VI, VII, VIII, X, and naturally, I have a special affinity for the characters from these games.

EmuGlx: Since this is the first big spin-off Final Fantasy game, are there any plans for an extended story in the future, or is there even a possibility of The World of Final Fantasy becoming a franchise of its own?

Square Enix: I think, it all depends on the fans and how they receive it, and if it’s a popular title with great support, we would love to continue expanding on it. But at the same time, if there is a direction from Mr. Nomura or Mr. Hashimoto to try yet another, different kind of Final Fantasy, we would take that on as a challenge, as well. It depends on what the demand is and that is something we need to consider. Of course, I have been with the franchise for a long time and I love Final Fantasy and in some way, shape or form I would love to continue working on titles such as this.

PSM UK: This is a broad question we’re asking all the devs, but what inspires you to keep making games?

Square Enix: Just the love for video games, period. Since the age of ten, when I had learned programming on my computer, I have always had this desire to make games, and just continuing on that passion and thought, I have come this far in my career. I believe that the thing that keeps driving me is just my love for games. I love making games and I love seeing games come to fruition.
Of course I also have a very strong desire to see players enjoy the games I make. Having players enjoy these experiences is very enjoyable for me as well.

EmuGlx: When making the first Final Fantasy game, Square thought it was the last title they would release, as the company faced bankruptcy – hence the name. Now there are more than fifteen games in the series, so, how do you feel about that, do you have a set number of future titles in mind, or will the franchise go on forever?

Square Enix:  Not only with Final Fantasy, but with any game, I believe that it depends on not only the creators but also the players. As long as there’s a demand for our games, and people continue to enjoy playing Final Fantasy games, we believe the series will continue as well. There’s no end to it. I have been with the company since it was called Square Soft, and I have worked with people like Mr. Sakaguchi and Mr. Kawazu, and have felt their passion for games first-hand, so I definitely want to continue bearing that spirit and continue making games that are reminiscent of that spirit. You can feel it living within even the recent games but at the same time, Final Fantasy needs to be new, always taking on new challenges. That’s an important element as well. So, keeping in mind the spirit of our forefathers is a great inspiration but also Final Fantasy is a constantly evolving entity, and I believe those are the core elements that keep the series going.

PSM UK: Looking at Final Fantasy XV, with its spin-off movie, and the animated series, are there any plans of making similar spin-offs with The World of Final Fantasy?

Square Enix: Of course, we want as many people as possible to know about The World of Final Fantasy. We have the name of Final Fantasy in our title, so it’s something that’s new, yet familiar. Of course, if there’s a way, it would be nice to have different spin-offs or anime, but unfortunately, we’re not able to confirm anything that’s not announced.
Also, we don’t want to imitate what other titles are doing, there’s no point in that so, we would love to explore something that’s unique to us.

EmuGlx: You mentioned the need for a broader audience, and since the Final Fantasy series had its games released on multiple platforms in the previous generation of consoles, are there any plans for porting the game to other platforms, such as Xbox One?

Square Enix:  When thinking about what platform to put this game on, an important gameplay element to consider was capturing and collecting monsters. This is a game you can play for a long period of time, so I felt that having it on the PlayStation platforms was ideal, where you can play on the PS4, but also cross-save on the PS Vita, allowing you to take your monsters outside with you and continue playing.  That sort of play style matched very well with the gameplay mechanics, and that’s one of the reasons why it’s not currently on Xbox. Of course, if there was a strong demand from our player base that would be something we might be able to consider.

Interview was done by Wahad
English transcript by dssst 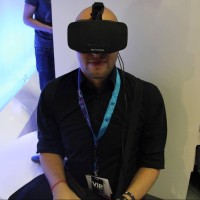 About the Author Milan Radosavljević